Proud to be a distributor for Nu Vet Plus Supplements.

for more information go to my NuVet Plus page

The AKC Standard says the Pomeranian is "buoyant in deportment... inquisitive by nature... cocky, commanding, and animated."

That he is. Vivacious and spirited, bold and brash, the typical Pomeranian thinks he's "hot stuff."

He is a sharp-eyed busybody who must check out every sight, sound, and activity and preferably tell you what he thinks about it. He is delightfully alive and aware of everything going on around him.

Keenly alert to approaching strangers, the Pomeranian requires early socialization so that he doesn't become sharp or shrill.

Most are fine with other pets -- it is a tribute to their amiability that male Pomeranians can often run and play together with little or no bickering. Some Poms, though, are bossy and will attempt to chase strange dogs, regardless of size.

The Pomeranian is very bright and will look directly at you, cocking his head attentively. BUT he is not inclined to take orders from anyone whom he views as below himself in importance. Don't allow him to become possessive of his food or toys, and control barking from day one.

This proud, self-possessed little breed won't meekly submit to mischief or rough handling and is not a good choice for children.

The girls kennel is warm/cool and comfortable for my girls.

For tips and suggestions on how to spot a scammer.  Please see my scam site page

Updated:
December 27, 2022
AKC Inspected and approved
We are in the process of doing Full Embark DNA on all the dogs.  In an ongoing attempt to avoid  breeding's that would produce puppies with genetic disorders. 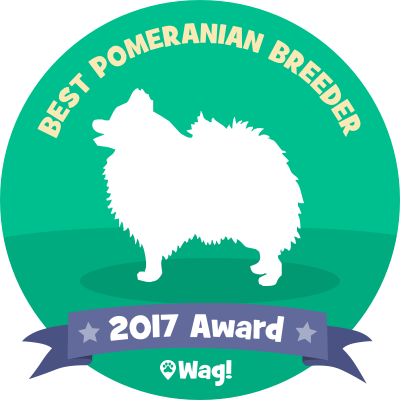 Medicine Lodge Poms LLC based in Dillon, MT is a Top 2017 Pomeranian Breeder!

There is no pet like a Pom.  Pomeranians bring new life and energy into your family, with loving and affectionate attitudes that never stop giving.  Medicine Lodge Poms specializes in raising beautiful, healthy and active Pomeranian dogs for sale that epitomize the best qualities in the breed.  Whether you are looking for a smart and beautiful show dog or an exceptional pet, you will find your companion at Medicine Lodge Poms.

Take a look at the puppies pages to find your new pet or show dog.  Pictures are updated regularly so you can check in on your friend as he or she grows up!  We love our pets and we only sell to loving homes looking for a lifelong companion with vet references required.  To learn more and add an amazing dog to your family, give us a call today.

We have finished the Kennel for the adult girls.  Young girls still live in the house until they have grown up.  Our girls have the freedom to go out into their runs any time they want.  They also get to play in the yard daily if they want to.   They have a covered deck and heated and air conditioned comfortable quarters inside.  I spend lots of time with them so they know they are loved.